Last week I worked 91 & 1/2 hours and the week before that I worked 87 hours. I will likely work in the 90 hour range again this week. This will probably continue for around two weeks, then life should return to normal. It can't come too soon.

LP cooked chicken gumbo last night and tonight we had leftovers. I can never have too much gumbo.

I have to get ready for bed. 4 AM comes early.

I have to go to sleep. 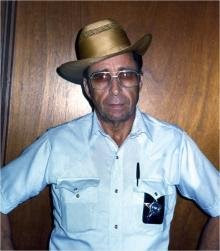 Saturday morning I left the house about 8:30, picked up my cousin Chris and his son Josh. We then preceded on to St. Augustine Catholic Church in Basile for the funeral of our great uncle, Wilfred LaFleur. Nunc Wilfred, as I knew him, was also my parrain (God Father). His death was not unexpected. He was old and had been very feeble for some time.

Nunc Wilfred was the police chief of Basile for many years. His obituary, in the Eunice paper, can be viewed here . He was a good man. His favourite name he used to refer to us when we were kids was "neg," which was than used as a term of endearment and our families were very close when I was growing up.
Lisa was sick so she did not go to the funeral, and Chris' wife Mindy also stayed home because their daughter was also ill. I did see lots of family and friends that I don't see regularly. That was good, but it is always a bitter sweet event. I am always saddened by the death of old Cajuns, because as they die the Cajun culture, language and accent that was so prevalent when I was young is dying with them.
I came home after the funeral stayed dressed up so I could attend a wedding shortly there after. Doug and Esther were married at Bethel. Lisa and I attended together, even though she was still not well. We left soon after we congratulated the couple. We then went to meet Morgan, it was her birthday and she had plans to meet some friends to celebrate. We made visited there for a little while and come home.
This Morning the boys and I worshipped at Bethel.
Coram Deo,
Kenith
Ps. Here is Nunc Wilfreds obituary from the Eunice paper:
A Mass of Christian Burial will be Celebrated on Saturday, October 11, 2008 at 11:30 am at the St. Augustine Catholic Church in Basile, for Wilfred LaFleur, 76, died on Thursday, October 09, 2008 at the Basile Care Center. Rite of Committal will follow in the St. Augustine Mausoleum under direction of Ardoin's with Father Brian Taylor officiating.
Wilfred was a resident and a former Chief of Police of Basile.
A loving husband, father, brother, uncle, grandfather and great-grandfather, Wilfred is survived by his wife, Rose Arabie LaFleur of Basile; a son, Donald James LaFleur of Basile; two daughters, Diana Courville and husband, Ronnie of Eunice, Gail Miller and husband, Joey of Basile; a brother, Lee Roy LaFleur of Lake Charles; a sister, Lucy LeJeune of Lake Charles; seven grandchildren and nine great-grandchildren. Wilfred will be missed dearly by all who knew and loved him.
He was preceded in death by his son, Wayne LaFleur; his parents, Willis and Armide Fontenot LaFleur; brothers, Edward, Willard, and Allen LaFleur; and a sister, Eve Johnson.The family requests that visiting hours be observed at St. Augustine Catholic Church in Basile on Saturday, October 11, 2008 from 9:00 am until time of services.
Family and Friends may view the obituary and sign the guest book online at http://www.ardoinfuneralhomes.com/

I've been working a lot since the hurricane brushed us to the west. I had hoped to go squirrel hunting, but I had to work. I was called out to cover Mitch who was sick. I worked of Sunday Morning. I had to sleep and was not able to worship with the folks at Bethel Presbyterian. St. Michael's Episcopal Church has a 5 PM eucharistic service so I worship there instead.

Monday morning, Cudd and I went fishing in Prien Lake. We caught sixteen speckled trout by the time I had to head home. I had to sleep so I could work last night.

Now I have to switch back to days so I can work on turnaround planning.