The Past Several Weeks

In the last three weeks I’ve been off shift planning a shutdown of a “Reformer” unit, I was off work four days sick with a fever and body aches and I’ve come back to work the shutdown that I was planning. It was a rough three weeks. During our shutdown we had an incident that could have gotten a couple of guys hurt, but thankfully no one was injured. Shutdowns are stressful even when everything goes right, our incident made it VERY stressful.

All this ended Friday. Our unit came up smoothly and I was able to leave after only eight hours at the refinery.  I left work at 1:30 and went to the blood bank to donate blood. They hooked me up to the machine and took a double portion of red blood cells. After giving blood I went to get the boys from school.

Friday evening Lisa and I decided to go dancing. Travis Matte and his band were playing at Yesterday’s, so we went there to dance to some Cajun, Zydeco and Swamp Pop music. We were not disappointed. The band was jamming and we danced to every song they played (lots of jitterbugging), except for one slow song. We had a solid three hours of dancing and it was a blast.

Saturday, we hung around the house. I did a few chores. A co-worker’s dad is a shrimper and he was selling shrimp for $2.50 a pound (headed) so I bought 20 pounds. Brian delivered the shrimp early Saturday afternoon. I cleaned several pounds and sautéed them in butter, lemon and fresh garlic. (They were yum). I also boiled several pounds along with some corn and potatoes, and this too was good. I spent much of the afternoon cooking and feasting on shrimp and watching college football.

That evening my good friend MK came over. I opened a good bottle of wine. We drank wine and discussed (lamented) LSU’s performance against . LSU won, but it was not pretty. LSU has a lot of talent, but they don’t look like they need to look.

Sunday, I took one of our sons to church Lisa stayed home with the other because he had a fever.

There, I think I have caught things up.

After worship on Wednesday I grilled chicken and sausage for supper. LP's parents came ove to eat and visit. Sunday evening there was a wonderful lightning display to the north. It was a great show that I enjoyed for about an hour.
I worked at the Refinery for Labor Day, after work came home. Lisa had invited Monica and Dan over for supper. We had salad, 2" tenderloin steaks, Steamed Veges with a lemon butter sauce and some fine red wines. Good food and good friends.
Worked today. I think I am getting a cold. Uuuuuugggghhhh.
Kenith
Posted by Cajun Huguenot at 17:04 Aucun commentaire:

This morning, I got up at 7:00. Lisa was already up and had started making gumbo chicken and sausage) for supper. After the gumbo, rice and potato salad were mostly done she went to her parents and then to the shop. I did some chores and then "cut the grass" (that is the way we say "mow the lawn" in South Louisiana.
Lisa got home about 11. We loaded up the truck with food. Lisa the boys and I headed for Mittie. Donna had asked me to bottle the home brew that Jon had started to celebrate the birth of their first grand baby.
We spent most of the afternoon in Mittie. I bottled the beer (5 gallons) played with the children outside, helped catch and saddle the horse, visited Jon's grave and read on their porch.
I pray for this family. Jon will be missed.
Coram Deo,
Kenith
Posted by Cajun Huguenot at 23:12 Aucun commentaire:

At work I've been planning on a shutdown for one of our units, so I'm off my normal shift. This weekend will be my last days of for a couple of weeks. This is not a "normal" shutdown and the work scope is pretty narrow, so it should be fairly easy.
Today I got off work in time to pick the boys up from school. We came home, they did their homework and I helped when it was needed. For supper, I warmed up leftovers (spaghetti Lisa made). I did my two mile walk/run this evening and got back in time to say evening prayers with the boys.
Now I'm gonna pour myself a glass of Merlot and take a bath.
Coram Deo,
Kenith
Posted by Cajun Huguenot at 22:04 Aucun commentaire:

Yesterday, we attended the funeral of Jon McCrary's funeral. The service for Jon was held at Bethel Presbyterian Church and was officiated by our pastor, Rev. Steve Wright. After the service, the procession drove an hour to the McCrary home. Jon was laid to rest in the McCrary family cemetery. 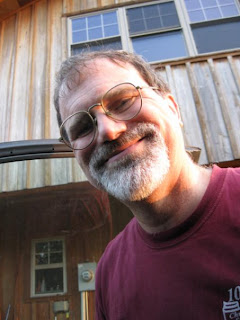 After words were said at the cemetery, Jon's friends lowered his casket into the ground placed the dirt into his grave. Jon was buried in a pine casket built by two of his friends.
It was a beautiful funeral and like no other funeral that I have ever attended.
Coram Deo,
Kenith
Posted by Cajun Huguenot at 16:16 Aucun commentaire: