We have been getting ready for Gustav and still have a lot left to do. I have gassed up all the vehicles and extra gas cans. I still hope and pray that we miss the brunt of the storm, but it is certain that someone on the upper gulf coast is going to be hammered good. and of course Hanna is also out there and may well gome into the Gulf as well.

In 2005 we stayed and went through Rita. I had always wanted to go through a hurricane, I did that with Rita and had hoped that I would not get another chance for a long time. I plan to evacuate my family this time. I will likely be needed at the refinery to help get it back up and running.

A good number of refineries are now in the process of shutting down. The refinery I work at is cutting back and getting into position to shut down tomorrow morning. Gasoline supplies will drop pretty soon and prices are going to spike soon.

I need to get back to work,
Kenith
Posted by Cajun Huguenot at 15:18 Aucun commentaire:

Lisa and I went out to eat last night for our anniversary (25th). Our anniversary is actually Monday, but Hurricane Gustave may be breathing down our throats at that time so we got "a night out" early. We ate at Mazen's and then went dancing.

The band last night was Louisiana Country. They played mostly Cajun and Swamp Pop and Lisa and I "passed a good time.

I have to shut this off and go start doing my hurricane preparations.

I was asked to serve in this by some of my fellow workers and decided to get on board because I see it as something to help keep me an my co-workers at the refinery. Refineries make oil and gasoline products by basically boiling oil and gasoline. It is safe when done properly and everything is treated with respect, proper caution and good sense. Safety is VERY important in this industry.

While in Anaheim I finished the Abhorsen Trilogy, by Garth Nix. It was GREAT. When I was young, I read a lot of fantasy, but not for a long time. My daughter, Morgan, has been after me for some time to read these books. She finally gave them to me in an audio format. Once I started them, they were hard to put down. I listened to them during every minute that I could find.


While in Anaheim, Instead of watching TV in my room, I listened to these books every evening until they were finished. Before leaving I listened to C.S. Lewis' ScrewTape Letters. I first read this interesting little book in 1980. I was on board the USS Francis Hammond and we 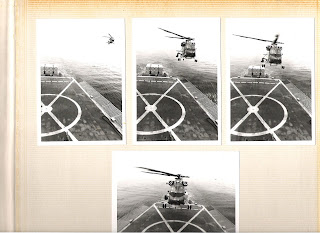 were on station in the Gulf of Oman. I did some of my reading in the back of an SH-2 anti-submarine helicopter, on which I was a crewman, sensor operator and rescue swimmer. The book is a difficult read at times, but it is a book worth the effort it takes to read. (FYI: I took these pictures of our helicopter in 1981 somewhere off the coast of Eastern Russia's Kamchatka Peninsula.)

Today, I am getting things ready just in case Gustave becomes a hurricane and heads our way. I hope not. It has taken us almost to now to recover from Hurricane Rita, which hammered us three years ago.

I have work to do.
Kenith
Posted by Cajun Huguenot at 09:54 Aucun commentaire:

I woke at 3:45 this morning and was at work for 4:30 am. I got there that early because I had to make 12 hours, but instead of my normal job, I spent most of the day meeting with management and uion reps to discuss safety and health issues at the refinery. I'm on the committee because the union appointed me to it earlier this year.

I think it is a good goup and our discussions are good for workers and the company.

At this moment I am tired. I stayed up late to watch the men's beach volleyball championship match .

Yesterday, I fixed pain perdu for breakfast. Then we all dressed and went to worship at Bethel. It was nice to have Morgan and Danny as well as Christian and Jessica there to worship with us. After the service we all went to lunch at Casa Manana and we were joined by or friends Mona and Dan along with Mona's son.

Yesterday afternoon Lisa, Jessica and I brought Christian to the airport in Houston, so that he could start his two day journey that will bring him at last to Northern Japan. He was stoic (for the most part) and Jessica held up nicely also, but it was obvious that both of them were dreading the rapidly approaching separation.

Today, I mostly worked on my son's truck, getting it ready to sell. Lisa was with Jessica most of the day helping her do what she need to do before she caught her flight tonight for California. Morgan came over to say her goodbyes as well.

Yesterday evening and today were hard days for me, and I can't imagine how hard it was for Christian and Jessica.

I'm watching the olympics, like millions of others around the world. in the last few minutes Michael Phelps just one his 8th gold medal in these games. I watched Dara Torres when two back to back silver medals. What a night at the Olympics.

Tomorrow we will go to Bethel for worship services and tomorrow afternoon we drive to Houston to bring Christian to the airport, so that he can start on the first leg of his trip to Japan. I'm going to miss my son a great deal.
Posted by Cajun Huguenot at 22:19 Aucun commentaire:

My alarm went off at 3:20 AM and though I was caught by to separate trains I still made it to work a little after 4 in the morning. I had rescue training, but that did not start until 7:30 AM, so I went to the central control room and visited with the guys on the control board (i.e. computers) then I walked to the satellite which is where I normally work to see how the guys were doing in the unit.

I had to make 12 hours at work, but rescue training was only eight hours. I left the refinery at 4 PM and met with Lisa.

Monday evening I started working nights. My last set of day light shift was very busy. We had to work from can to can't each of the 12 workdays. Our nights were better, but something went wrong every evening so that none of the were "good" shifts.

I worked of this morning and slept until a little after noon. I visited with Christian and Jessica for a little while before they left to meet with Morgan and Danny. The boys and I took of late this afternoon for Longville. We visited with my parents for a couple of hours. Dad and I picked some 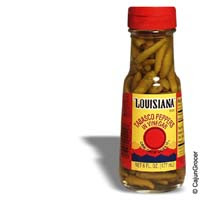 muscadine grapes (native wild grapes, golden color) that he has growing at his place. I ate most of the ones I picked, as I picked them.


I am up way too late, because I plan to get up a 3:20 AM. I got a bit hungry while watching the Olympics so I made myself a snack. I t was a can ofVienna sausages, half a dosen pickled tobasco peppers, Louisiana hot sauce (more tobasco) and some dill relish. Not a bad snack.

Now I need to go to sleep so I can get to work very early tomorrow morning.

Just for fun I decided to put some more Banana Spider pictures up. Some of them may already be posted below. If so Sorry for the repeat.

More pics from the wedding.
The handsome couple. 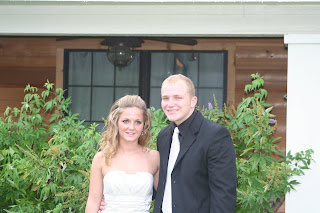 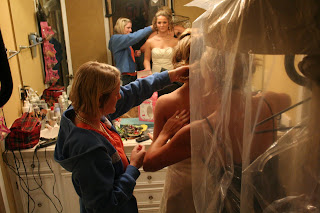 Getting ready for the wedding. 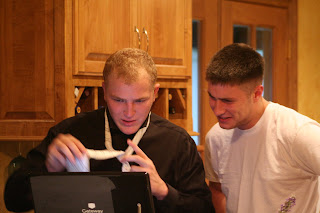 The groom doing the same thing. 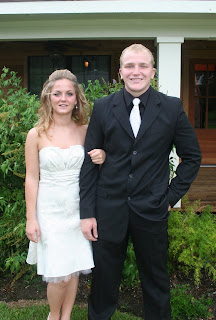 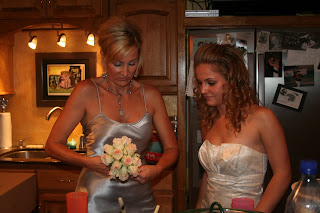 Lisa and my beautiful new Daughter-in-law. 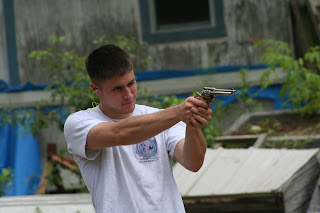 Today, Christian, his (Navy) buddy Graziano and I went to Longville. They wanted to do some shooting before Graziano heads back to San Diego tomorrow. Graziano is a very nice young man. He and Christians became good friends while the were both in Pensacola, Fl.

I took my SKS, a .22 caliber pistol and a few hundred rounds of ammo. We drank coffee and visited with my parents and then went out back to shoot. The boys did the shooting and I took a few photos. 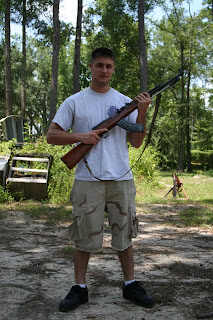 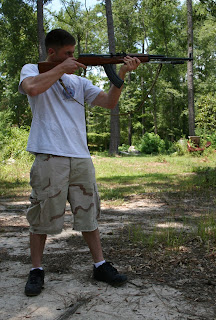 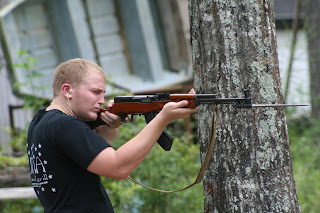 The SKS looks bad and is a lot of fun to shoot. 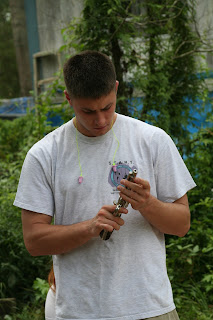 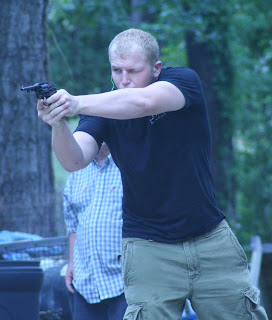 This Banana Spider and several others were hanging out at my parents hous. Just chillin and watching the shooting. 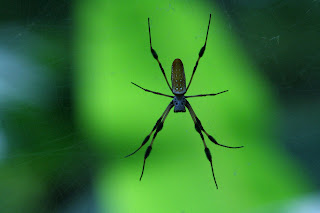 Yesterday afternoon my eldest son married a beautiful young lady from Pennsylvania. They were married here at the house with just a very few friends and immediate family. It was a nice ceremony performed by Pastor Wright.

Christian drove 2,900 miles, in three days, to get here for the wedding. He picked up Jessica in San Diego, after the first 1,300 miles, and they drove together from there to here together.
Lisa spent most of the last week getting everything for the wedding. It was a very busy week, but she did a great job making arrangements and pulling everything together. Here are some pictures: 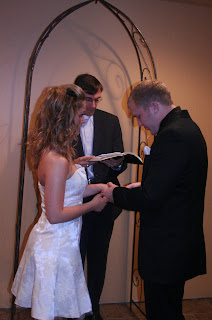 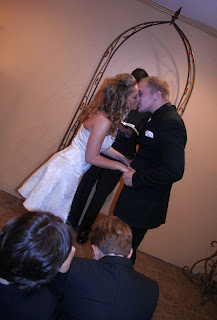 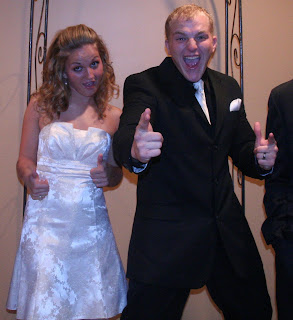 My son and his fiancee drove in this morning. He drove 2,900 miles since Wednesday afternoon. He picked up his fiancee a little less than halfway home and the two of them drove the rest of the way together.

I have to work this weekend, so I will not be able to attend worship services tomorrow. The past week I started painting the house the front of the house, and will finish the rest of the house over the following weeks (as time allows).

I hope we have a quiet day at the refinery.