Today was a good day. I fixed breakfast for Lisa and the boys, just eggs and sausage this morning. We then got dressed and attended worship services at Bethel (PCA). After worship we ate dinner at Piccadilly Cafeteria and then came home. The boys had friends come over and the played.
I had to work Friday night to Saturday morning, so I slept until noon Saturday. Most of the afternoon was spent with the boys. Saturday evening Lisa and I went to see Ann Savoy (pronounced Sahv wah) and Her Sleepless Knights. We enjoyed the music, food, beer and dancing.
The concert/dance was part of McNeese's Banner Series. Banner's is a great community event and I so enjoy attending their events.
It's time to read a bit.
Coram Deo,
Kenith
Posted by Cajun Huguenot at 21:50 Aucun commentaire:

I worked Rescue Standby at the refinery on the night of the 17th. It was a quiet evening. I started the shift by reviewing the confined space, which was the reason I was on standby. I spent a good portion of the evening at the turnaround observing the work being done.
I did take time to cook another batch of pain perdu for some of my co-workers. I worked 13 1/2 hours. After work, I came home and slept until 1:00 pm. When I got up, I ran a couple of errand and then picked up the boys at school.
When Lisa got home, we all went to the park at Center Circle to practice tennis and shoot some hoops. For supper we splurged and went Chili's.
That was how things went yesterday.
TODAY, Lisa and celebrate the 27th anniversary of our First (blind) Date. Best of all, after 27 years she still likes having me around!!!!!
Later,
Kenith
Posted by Cajun Huguenot at 06:00 Aucun commentaire:

Yesterday my day started at 6 AM, when I got up and got the boys up for school. After bring them to school, I returned home and got ready for my day.
I've been having some pain in on the right side of my lower back, so Lisa scheduled me for a massage at GiGi's. After my massage, which was great, I picked up a pepperoni pizza from Tony's Pizza and went to visit my grandparents and bring them lunch.
My grandfather (Pawpaw), is an old Cajun who first language is French. He turned 90 last week and one of his favourite foods is - you guessed it - pepperoni pizza. After lunch I went by the union hall discuss an issue with some of the local's leadership.
While I was at the hall, Morgan picked her brothers up at school. I met her at the house. She and I then loaded up a bookshelf and brought it to her house. I then returned home for a short while and returned to the union hall for our monthly meeting, which turned out to be a very long one.
I got home at the boys bed time, and said prayers with them. Lisa too was in bed. I picked up a book and read for a while, before going to bed myself.
Coram Deo
Kenith
Posted by Cajun Huguenot at 07:50 Aucun commentaire: 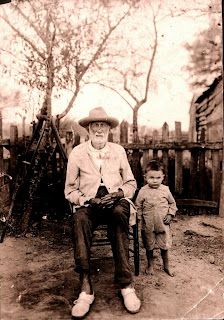 Today, I worked last night (rescue standby) came home and was in bed for 6:30 am. Woke at 9 am to attend Wednesday morning worship at St. Michael's (Anglican Ch) then I met Lisa for lunch at Olive Garden for lunch. After lunch I went to visit my grandparents. My grandfather will be 90 years old tomorrow.

PawPaw, as we call him is an old Cajun who learned English after his children started school, but French remains his first language and the language he is most fluent in. His father, Eduard Jeansonne lived to be at least 95. Pawpaw's grandfather, Auguste Jeansonne lived to be 113 years old. My Grandfather must have had a English educated priest because with him, and his siblings the spelling of their family name changed from Jeansonne to Johnson. I've told my Johnson cousins that I would change the spelling back to Jeansonne, because there are to many Johnsons in this country already.
My dad will turn 73 tomorrow. His family too has a good be of longevity in years so I hope and pray that it is passed on to him and my mom.
After my visit with Pawpaw I picked the boys up at school and shot some hoops before they started their homework.
It's been a good day and I will be very ready for bedtime when it comes tonight.
Coram Deo,
Kenith
PS. The picture is GG grandfather Auguste and Pawpaw Adam (circa 1923)

Last week was a fairly busy one. I worked 56 hours and I also qualified on the first (entry) job for the lab. I am now a lab technician and no longer an operator at the refinery. O did the operations thing for 19 years. and I've worked as top or lead operator more than a quarter of those years.
Saturday, was a busy day. First, I worked around the house, then I went to a diaper party in honour of Gus, who will enter the world next week. Us men, went and bought diapers and brought them to Woody (the dad) and then we talked drank a few beers and ate barbecued brisket prepared by Big Woody (Gus' pawpaw). I had to leave before the "washer toss" games began.
I got home in time to take the boys to see Avner the Eccentric at McNeese. We all enjoyed the show. Saturday evening, Lisa and I went dancing for a little while at the Isle of Capri's Caribbean Cove lounge.
We did not stay long and were home around 10:30, so that we could attend worship services at Bethel on Sunday.
Sunday morning we worshiped at Bethel Presbyterian Church (PCA). After worship services we ate at Piccadilly Cafeteria. The boys and I then went to a workshop with Avner the Eccentric and Lisa went to a wedding shower.
We were all together again by 4:30. Lisa and I then went to a benefit dance at the VFW in lake Charles. There were lots of fine Cajun and Zydeco bands playing. We were home by seven.
That is conclusion of our very busy week. Oh-- I forgot to add that LP and I made a run on Saturday to Academy, so that I could by a Saints Super Bowl cap.
Later,
Kenith
Posted by Cajun Huguenot at 20:00 Aucun commentaire: